Context : Recently, the new Japanese Prime Minister Yoshihide Suga met with the new United States President. Both the the leaders have set the agenda for the wider Indo-Pacific engagement.

Given that the Japanese Prime Minister plans to visit India as soon as the situation permits following the Covid-19 pandemic, his dealings with the U.S. are a preview of what India can expect from Japan.

PM Modi once remarked that mutual trust and faith, understanding of each other’s interests and concerns, and continuous high level interactions mark the uniqueness of Indo-Japan relations.

What are the different dimension of this relationship? 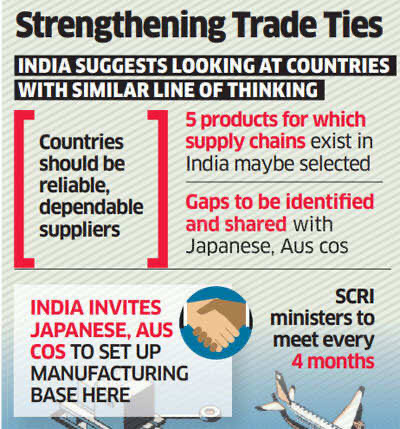 What to expect in the upcoming India-Japan meet?

That Japan was the only nation to extend public support to India during the Doklam confrontation with China is symbolic of the extraordinary transformation of relations between the two Asian powers over the last few years.She also backed India during the Galwan valley clashes saying it opposes any “unilateral attempt to change the status quo” on the Line of Actual Control(LAC).Rise of China and uncertainty over America’s role in Asia has brought Japan and India closer. Modi and Suga should overcome the bureaucratic inertia that limits the relationship’s possibilities and realise Shinzo Abe’s dream of a “broader Asia”, linking the Pacific and Indian Oceans to form the Indo-Pacific.