Each year the International Day of Peace is observed around the world on 21st September.

Theme for 2020 : Shaping Peace Together. 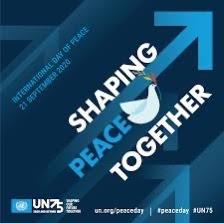 Mahatma Gandhi throughout his life adopted

This day is dedicated to fortifying the principles of peace, both within and among all member states and peoples.

Celebrate the International Day of Peace by spreading compassion, kindness and hope in the face of the COVID-19 pandemic.

Intellectuals, social movements and responsible states should prioritise struggling for an equitable world order. Nothing less will suffice to silence the guns.