GS 3 ENVIRONMENT- Bio-diversity: Impact of the loss of biodiversity

Animals can be classified as either vertebrates or invertebrates.

Vertebrates are animals that have a backbone inside their body. (fish, amphibians, reptiles, birds and mammals.)Invertebrates don’t have a backbone. They either have a soft body(worms and jellyfish) or a hard outer casing covering their body(spiders and crabs.)

Prepared by the World Wildlife Fund and Zoological Society of London.Based on the global dataset analysed between 1970 and 2016. 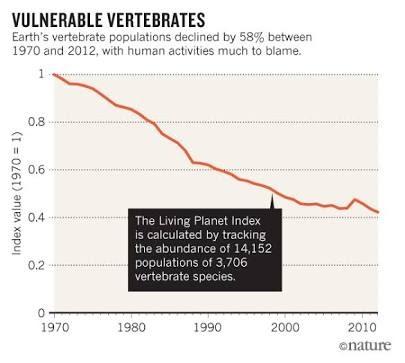 Factors for the decline:

(role of pollution and climate change was proportionately higher at 16%)

In the first six months of 2019, of the 240 proposals seeking diversion of forest land, 98.99 per cent of forest land considered for diversion was allowed to be put to non-forestry uses.      The WWF India factsheet also put up data to highlight how forest land has been diverted and has been affecting biodiversity.This is leading to fragmentation of the habitats and biodiversity loss.