Democracy is both a form of government and an ideal, an aspiration and a standard. The core element of democracy is self-rule.
A  democratic  polity  can  be  classified  into  two  categories monarchy  and  republic.  In  a monarchy,  the  head  of  the  state (usually  king  or  queen)  enjoys  a  hereditary  position,(e.g., Britain. ) In  a  republic,the  head  of  the  state  is  always  elected  directly or indirectly for a fixed period( e.g., USA.)
A  democratic polity,  as  stipulated  in  the  Preamble,  is  based  on the doctrine  of  popular  sovereignty,  that  is,  possession  of  supreme power by the people. 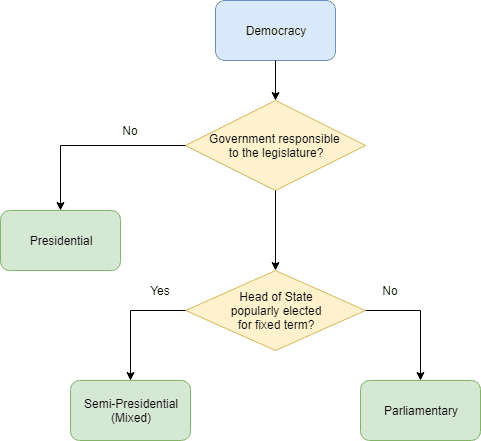 Democracy  is  of  two  types–direct  and  indirect.Direct democracy,  the  people  exercise  their  supreme  power  directly(Switzerland.)  There  are  four  devices  of  direct democracy,  namely,  Referendum,  Initiative,  Recall  and Plebiscite.

In  indirect  democracy,the representatives  elected  by  the  people  exercise  the  supreme power  and  thus  carry  on  the  government  and  make  the  laws.  This type  of  democracy,  also  known  as  representative  democracy,  is  of two kinds–parliamentary and presidential.

The Indian Constitution provides for representative parliamentary  democracy  under  which  the  executive  is responsible  to  the  legislature  for  all  its  policies  and  actions.

The  manifestations  of  the  democratic character of the Indian polity:

Rarely is a government formed backed by a majority of votes won in a free and fair election.

Elections created space for change of governments even as they guaranteed security against challenge to the regime; the challenge could arise only outside of it, through ‘revolutions’.

The unprecedented concentration of wealth at the top 1% around the world knocks the bottom out of competition in the market, so integral to its freedom.

Since independence, India has managed to stay on the democratic path in a way unprecedented among states freed from colonialism during the last century.The makers of our Constitution designed the institutions of our democracy with great care and attention to detail.They were designed to endure and it was expected that these institutions will strengthen the democracy in India.